You are here: Home › Technology › Even in the Shower, the Temptation to Text Is Too Great 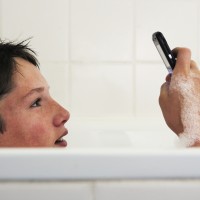 Have you ever been surprised to see your teen texting during an inappropriate time, such as at a religious procession or while driving? Turns out, they’re not trying to be rude or put themselves in danger. According to a new study, they just can’t help it.

Researchers at Penn State University asked 152 college aged students to fill out a 70-question survey on their texting habits and attitudes toward texting in various situations.

They found that students are aware that texting during inappropriate situations such as in the shower, while driving, or at a religious ceremony is wrong. But they just can’t fight the temptation to do it anyway.

If college aged students are unable to resist the urge to text, it’ll be even tougher for teens. According to the study, when they receive texts, the temptation to check the message and respond is much greater than the desire to pay attention to their present situation—even if they’re in the shower or using the bathroom.

The researchers found that participants were not trying to create new norms in texting behavior, but that breaking these norms is just too tempting in many cases.

We are all programmed to notice movement and change, so maybe those buzzes and bells of texting, just like certain sounds that used to indicate the charging of a predator, for example, reinforce the need to find out what is going on.

One way to help keep your teens from texting would be to encourage them to silence the phone and put it out of sight. If they can’t hear the buzzes and bells, they won’t be as tempted to check and respond to messages. Remind them that being on their phone keeps them from doing things that may be much more important than responding to “what’s up?” right away.

For more on teens and their phone habits, check out “Help! I Can’t Put Down My Phone” from the May issue of Choices. Choices is a teen health, well-being, and life skills magazine published by Scholastic.