You are here: Home › Technology › Believe It Or Not, Video Games Can Boost Teens’ Brains 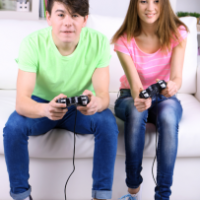 By Jamie Primeau on April 7, 2015 in Technology

Before you tell your teen to put down their video games, read this first! Despite the belief that video games may make teens more violent or causes them to lose empathy, a new study suggests gaming has brain benefits. Research from Brown University found that video games not only sharpen the visual learning process, but may also improve the brain’s ability to process visual tasks.

According to studies, those who play video games are better at visual tasks, such as managing distractions or identifying targets. In order to test this idea, the Brown study compared nine avid gamers with nine other people who rarely, or never, play video games. Participants took part in a trial of visual learning tasks for two days. On the first day, they were trained on two visual learning tasks, and then completed the same tasks the next day to see if they had improved.

The results? The gamers improved their speed and accuracy on both tasks. Meanwhile, the non-gamers improved on one task, but not the other. That’s because learning the second task caused them to forget the training from the first task. The gamers were able to retain the information, even when moving from one task to the other.

In the press release, the researchers explain:

It may be possible that the vast amount of visual training frequent gamers receive over the years could help contribute to honing consolidation mechanisms in the brain, especially for visually developed skills.

As far as the benefits of video games, Aaron Berard, the study’s lead author, says:

A lot of people still view video games as a time-wasting activity even though research is beginning to show their beneficial aspects. If we can demonstrate that video games may actually improve some cognitive functioning, perhaps we, as a society, can embrace newer technology and media with positive application.

For more about teens and their brains, check out Choices magazine! It’s a health, well-being, and life skills resource for middle and high schoolers published by Scholastic.