You are here: Home › Substance Abuse › This Popular Trick To Keep Teens from Drinking May Backfire 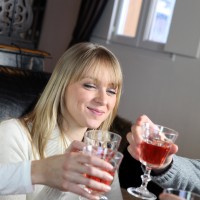 By Ariana Marini on April 1, 2015 in Substance Abuse

Have you ever let your kid try a sip of your beer or wine? It’s seemingly harmless, right? A new study shows that kids who sample their parents’ alcohol may be more likely to binge drink when they’re older.

Researchers surveyed 561 students periodically over three years. Students who sipped their parents’ alcoholic drinks by sixth grade were five times more likely to drink a full alcoholic beverage by the time they were in their first semester of high school than their peers. They were four times more likely to get drunk or binge drink.

Some parents may believe that teaching their kids about alcohol and introducing it to them early on in the comfort of their own homes will help them make responsible choices in the future. This study shows this method will likely result in the opposite effect.

Our findings underscore the importance of advising parents to provide clear, consistent messages about the unacceptability of alcohol consumption for youth. Younger teens and tweens may be unable to understand the difference between drinking a sip of alcohol and drinking one or more drinks.

This, of course, doesn’t mean your kids are doomed if you’ve already allowed them to sample your alcoholic beverages. But it’s important to recognize that this practice may not be the best way to promote responsible drinking. Make sure to give kids clear, consistent messages about the dangers of alcohol and answer any of their questions.

For more about teens and alcohol use, check out our story “The Danger Lurking in Just One Drink” from our April 2015 issue of Choices. Choices is a health and well-being magazine for teens, published by Scholastic.

View all posts by Ariana Marini →
Peer Pressure Influences Teens’ Decision-Making, But Here Are Ways To Avoid It
Puberty Resources & Advice For Parents of Preteens