You are here: Home › Relationships › Peer Pressure Influences Teens’ Decision-Making, But Here Are Ways To Avoid It 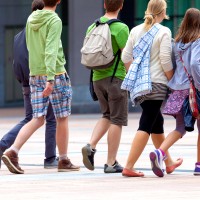 By Jamie Primeau on March 31, 2015 in Relationships

Most of us are familiar with the concept of “peer pressure” — when teens can be persuaded by their friends to participate in risky activities that they otherwise might avoid. Now a new study from University College London supports this idea that adolescents’ judgment is affected mostly by what their peers think, compared to what adults think.

For the study, participants ranked the riskiness of a variety of situations such as crossing at a red light or walking through a dark alley. Afterwards, they were told how either adults or teens ranked the same situations. Then they re-assessed their own rankings of how dangerous these activities were.

Based on the results, young adolescents (age 12-14) were more likely to be influenced by the opinions of fellow teens than adults. The study’s senior author Professor Sarah-Jayne Blakemore explains:

As people get older, they become more confident in their own judgment of risk and less swayed by other people… We know that adolescents are more likely to take risks when with peers than alone.

Our study showed that young adolescents do not perceive situations as less risky than older age groups, but do tend to change their risk perception in the direction of the opinions of similar aged peers. So other teenagers’ opinions about risk seem to influence young adolescents into judging a situation as less risky than they originally thought it was.

Since teens’ opinions are influenced by their peers, who they decide to surround themselves with is important to their future. Studies show that teens who spend time with high-achieving friends are more likely to succeed than those who don’t.

For more about this topic, check out the “Friendfluence!” story from the October issue of Choices. We also recommend this month’s How To Deal video. It’s filled with strategies to help say “no” to peer pressure! Share it with every teen you know: